I went to Art Basel Miami Beach for the first time last week. It was definitely fun to get an eyeful of the Warhols and Picassos that you’ll probably never see otherwise, because they’re essentially moving from one private collection to another. But, since I’m not really in the market to buy a $20M Jeff Koons, I was less interested in that big convention center hoopla (I did an “intentionally poorly taken iPhone photo” review of that exhibit over at Curator Magazine). Luckily, there are tons of other things going on during Basel, and there’s something for everybody, even in loo options, as evidenced by these:

I’m guessing that Wynwood has the highest concentration of street art in the country – even more than Brooklyn – and during Basel it seemed like everybody was there tagging, pasting, and painting any available wall or building in the area, during the day and all through the night. 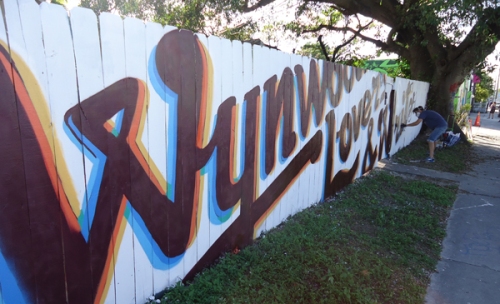 And then finished it up the next day.

I found L.A. artist Christina Angelina spraypainting in, yes, her roller blades (“oh – I forgot I had them on”) finishing this portrait of one of her friends.

And this one, which is pretty fantastic (blow it up in a new window and see the hi-res for yourself).

And the London Police hosted a 90-minute graffiti battle with Elle, Galo, and others: 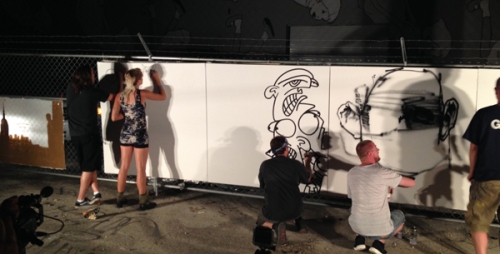 For me, the most fun thing was being able to get in on the action. The esteemed Cash For Your Warhol asked me to collaborate on a wall, an idea that became necessary when his posters were tagged overnight (“It is the street, after all”).

I didn’t try to cover up the entire tag mess. There’s no point, really, because the whole place is going to be demolished shortly when the property gets developed.

Yuk yuk, right? CFYW approved, and the wall was at the entrance to the London Police party, so plenty of people got to say to themselves “what the heck are those numbers on the ground? Whatevs – might as well stand on them to get my picture taken.”

So, all good. And one more thing: 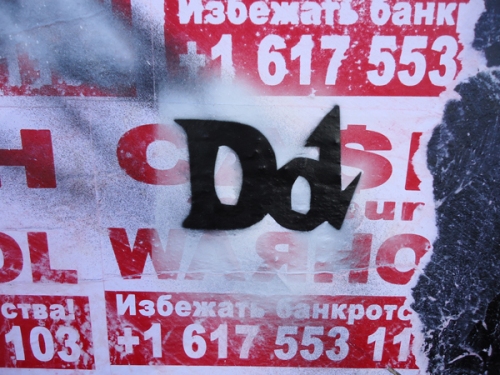